Army Corps Under Fire: In a Flood, It Released More Water

SAND SPRINGS, Okla. — People whose homes had flooded filled the pews of a Baptist church that was still standing on dry ground. They bowed their heads as Oklahoma’s junior senator, James Lankford, led everyone in a prayer.

But when a representative of the Army Corps of Engineers stood at the microphone to address residents of this waterlogged neighborhood outside of Tulsa, there was a sudden burst of anger.

Some of the heaviest flood damage, residents said, was a result of the Corps’s own actions: Heavy rainfall had forced the federal agency to open nearby Keystone Dam and release a large amount of water into the Arkansas River, flooding parts of Sand Springs and other towns.

Mike Abate, the chief of civil works in the Corps’s Tulsa District, was asked if his home had flooded. And why had the Corps not emptied the reservoir months ago, before the deluge hit?

Residents of Sand Springs, Okla., prayed at the start of a community meeting on Thursday.CreditJoseph Rushmore for The New York Times 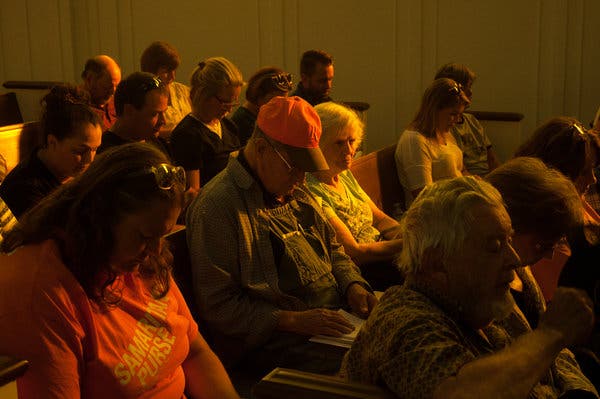 “We people along the Arkansas River, people along the other rivers controlled by the Corps in this country, want you pulling the pools down,” John B. DesBarres, a lawyer whose home was flooded, said loudly, as many in Thursday evening’s town hall audience applauded. “It’s a taking of our property without just compensation.”

So tense was the gathering that Mr. Abate showed up with a Secret Service-style security detail. Most of the evening he was on the defensive, as the Corps has been throughout the extraordinary spring deluge that has flooded rivers from Oklahoma to Louisiana, overtopping levees and forcing the federal agency into the position of choosing which communities will be inundated with water its dams can no longer hold.

On Friday, surging floodwaters breached levees on three major rivers in two states, flooding the town of Dardanelle, Ark., where 160 homes had to be evacuated.

“The systems worked the way they were designed, the way they were engineered,” Mr. Abate said after the meeting in Sand Springs. “I think our people made really good decisions. The problem is when you get to a point where the rain just keeps coming.” 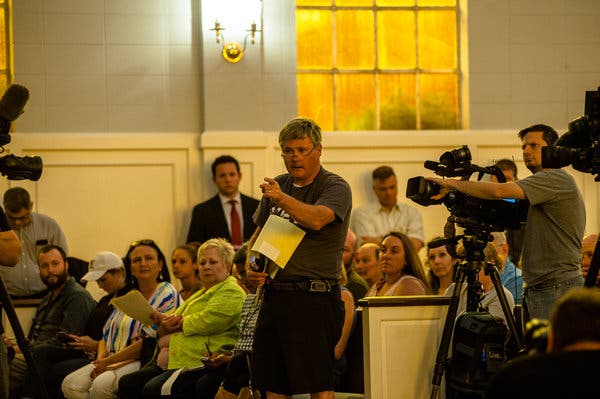 The Corps of Engineers, one of the world’s largest engineering agencies, has for the better part of two centuries managed the complex network of dams, reservoirs, canals, hydropower plants and levees on the nation’s largest waterways, a job that was often solved with generous applications of earth, concrete and riprap. In recent years, the agency’s flood control mission has been complicated by competing new obligations to protect fish and wildlife resources, promote recreation and maintain navigation for ships and barges.

The record-setting floods this spring have thrown into sharp relief the difficulty of managing all those priorities when so many of them — particularly the unusual weather patterns that have sent an unprecedented amount of water churning down the Arkansas River — are unpredictable.

Scientists have suggested that while flooding is a complex phenomenon, climate change could be making such floods worse and more frequent.

“There’s some folks out there that think we can control everything,” Sean L. Smith, principal hydrologic and hydraulic engineer for the Corps, said in a telephone interview on Friday. “Mother Nature does what she’s going to do, and there are limitations on what we can do.”

Every Friday, get an exclusive look at how one of the week’s biggest news stories on “The Daily” podcast came together.

“I’m a public servant. If I need to serve the public by getting yelled at, that’s O.K.,” said Mike Abate, the chief of civil works in the Corps’s Tulsa District.CreditJoseph Rushmore for The New York Times 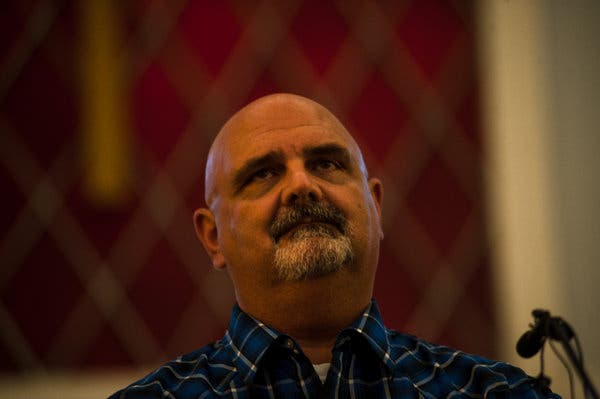 Local and federal lawmakers in both parties, as well as flooded residents and their lawyers, say the Army Corps has mismanaged its waterways, allowed its infrastructure to age and crumble — the average age of the more than 700 dams it operates is 56 years — and has moved away from its flood-control mission in favor of protecting endangered wildlife as well as commercial and recreational interests.

After widespread flooding in the Midwest in March, Senator Chuck Grassley of Iowa, the state’s senior senator and the powerful Republican chairman of the Senate Finance Committee, criticized the Army Corps in remarks on the floor of the Senate.

“Southwest Iowa communities have raised grave concern about the unresponsive Corps of Engineers,” Mr. Grassley said, noting the agency’s decision in 2011 to have the Iowa town of Hamburg remove reinforcements in a levee that later breached and flooded the area. “For years, I’ve worked with several of my Midwestern colleagues along the Missouri River to make flood control the No. 1 priority of the Corps. It seems to me that misguided decisions and misplaced priorities have eclipsed common sense,” he said.

The immediate issue troubling property owners in Oklahoma and elsewhere is the Corps’s management of dams holding back floodwaters, a policy debate that has roiled riverside communities across the Midwest in recent years.

A truck sat in the flooded backyard of a home just below a levee on the west side of Tulsa, Okla., on Tuesday.CreditJoseph Rushmore for The New York Times 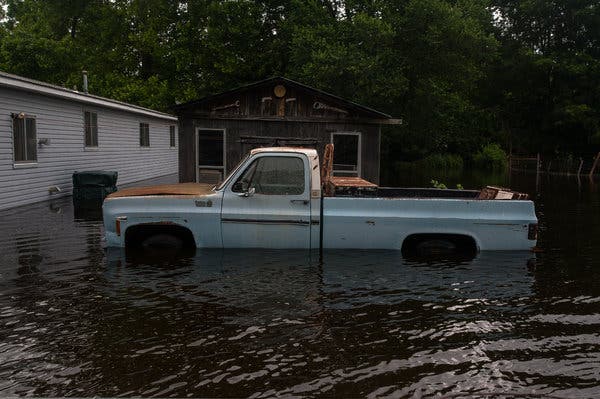 Reservoirs in Kansas, Nebraska and Oklahoma are filled to capacity, with the Corps recently forced to start releasing water in several states. Water had been flowing out of Keystone Dam here in Oklahoma at more than double the rate at Niagara Falls. The Corps next week was scheduled to take the rare step of opening a flood-control structure near Morganza, La., to divert the Mississippi River, inundating 25,000 acres of rural Louisiana in the hope of preventing even worse flooding in Baton Rouge and New Orleans.

Homeowners in flooded Oklahoma communities say the agency should have released water from behind Keystone Dam earlier in the year, creating room for the runoff and rain that could be expected during the spring. Corps officials say it is not that simple: They need to wait until actual rainfall occurs, because a precautionary release could be disastrous if heavy rain occurred downstream at the same time.

“We make tough choices that can allow some flooding to avoid a catastrophic, uncontrollable release of water that would threaten massive property damage and loss of life,” the agency said in a statement. “Although Keystone also provides water supply, hydroelectric power, navigation and fish and wildlife habitat, flood-risk mitigation is its primary purpose.”

The issue of whether the Corps is sufficiently prioritizing flood control was front and center last year when a federal judge in Washington handed the agency one of its most significant courtroom defeats in years, in a lawsuit brought by hundreds of farmers, landowners and businesses along the Missouri River in Iowa, Missouri and other Midwest states.

A sign directing residents of a west Tulsa neighborhood toward a shelter after a voluntary evacuation was announced.CreditJoseph Rushmore for The New York Times 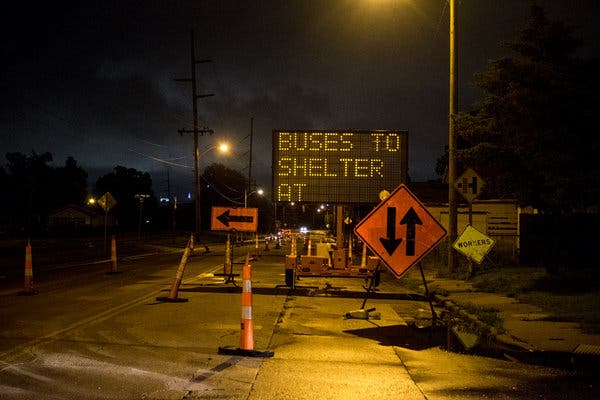 The judge found that a series of changes the Corps had made in the management of the Missouri River worsened flooding during more than 100 flood events from 2007 to 2014. The agency’s changes were made to benefit endangered birds and fish — including a small black-crowned bird known as the interior least tern — and “led to greater flooding” for many of the property owners, the judge concluded. One of those changes included reopening previously closed chutes to create shallow water habitats for wildlife.

The case is now in its second phase as Judge Nancy B. Firestone of the United States Court of Federal Claims determines how much compensation to award flood victims on the Missouri River. Lawyers for the farmers said the federal government could be facing a flood damages payout of more than $340 million.

“They’re not proactive — they’re reactive,” R. Dan Boulware, the lead lawyer for the farmers and other plaintiffs, said of the Army Corps. “There’s no question that there’s extraordinary weather, extraordinary rain this year. But to simply say that all the flooding that’s taking place is solely attributable to weather is an exaggeration. The lower river is like a sluggish drain in your bathroom: It just doesn’t drain as fast and it doesn’t have the carrying capacity. That’s all man-made.”

The opening of the Morganza Spillway in Louisiana has spread worry throughout the region, not only among farmers concerned about damaged crops, but also wildlife advocates. It was supposed to happen Sunday, but was pushed back to Thursday.

A view of the flooded Arkansas River near the Oklahoma and Arkansas border.CreditJoseph Rushmore for The New York Times 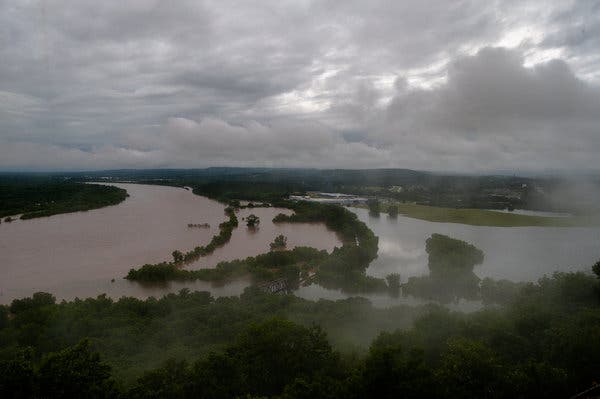 “The thing about Louisiana farmers and our people is we’re very resilient, but it’s a hard thing to tell a man that you’re going to destroy his crops,” said Michael G. Strain, the Louisiana agriculture commissioner.

The last time the Corps opened the spillway’s floodgates, in 2011, an epic flood inundated nearly 100,000 acres of agricultural land, forced a cattle evacuation and reduced production of oil and natural gas. In St. Mary Parish, about 100 miles southwest of Baton Rouge, nearly 50 homes and businesses were flooded. And it wreaked havoc on local wildlife, killing an estimated 1,600 whitetail deer and displacing the Louisiana black bear, a federally listed threatened species.

Mr. Strain praised the Army Corps’s handling of the current situation, saying that not opening the spillway would threaten the structure’s integrity and thousands of acres downstream. “If we did not do this, the flooding would be worse. It would be catastrophic.”

At the church in Sand Springs, flooded neighbors and some officials came up to Mr. DesBarres when the meeting was over and thanked him for speaking out. He said his three-bedroom ranch-style home has about seven feet of water inside.

He said he would work with elected officials to pursue an investigation into the Army Corps and its policy of waiting for rain on the ground that prevented it from lowering the reservoir long before the storm. “They failed miserably in their mission of flood control,” he said. “I get it that they had to do something so the water wouldn’t come over the dam. But that’s kind of late, isn’t it?”

“I would like to see an examination of the policy,” she said. “If we are in a spring where the weather pattern looks like it’s going to be a very wet spring, then let’s bring down that flood pool.”

Mr. Abate stayed in the worship center after the meeting ended to answer residents’ questions. He defended the agency’s decision to not prerelease water until the rain starts coming down, and said he didn’t mind the heated comments. “I work for the government,” Mr. Abate said. “I’m a public servant. If I need to serve the public by getting yelled at, that’s O.K.”

Mr. DesBarres approached Mr. Abate after the meeting. Mr. DesBarres was done venting. He wanted to make sure there were no hard feelings. He extended his arm to Mr. Abate, and the two men shook hands.

By Manny Fernandez and John Schwartz

In This New Co-Living Partnership, Friendships Are the Ultimate Amenity