A doomsday atmosphere has developed in the village of Chentian on the outskirts of Guangzhou, the capital of China’s Guangdong province. Red banners urge local residents to leave the village that has stood for over 800 years, small shops are clearing out their inventories, and people who have lived there for decades are nervously debating their uncertain futures.

The whole mini world of Chentian – made up of hundreds of low-rise concrete buildings and thousands of small shops and restaurants dotting narrow streets, and supporting the daily routines of an estimated 100,000 residents not far from the city’s airport – will begin to disappear in the coming months and years, according to the Guangzhou government plan, to be replaced by a cluster of high-end shopping malls and residential buildings.

Chentian is just one of 272 urban villages under threat in Guangzhou’s three-year action plan for 2018-2020 as the city rushes to modernise itself to become the hub of the “Greater Bay Area” and to catch up with the other large cities like Beijing, Shanghai and Shenzhen, although it is not clear if they are all under threat within the time frame.

The Chentian village development plan, which covers an area of 60 hectares (150 acres) or three times the size of Victoria Park in Hong Kong, is just a small piece of Guangzhou’s plan to redevelop 320 sq km of urban villages, or four times the size of Hong Kong Island. 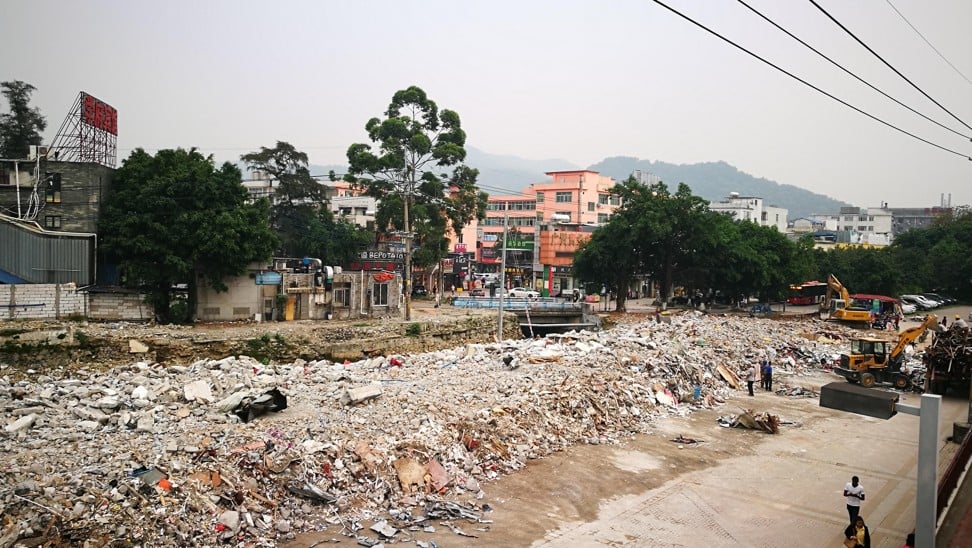 The eye-popping urbanisation plan in Guangzhou, in turn, is just one of the dozens, if not hundreds, of Chinese municipal urbanisation plans that will transform the country’s landscape and power the country’s development but also inflict pain on disadvantaged residents as well as also create huge debts that pose potential risks in the future.

In March, Hong Kong-listed developer R&F Properties won the bid from the mainland Chinese government for the wholesale redevelopment of Chentian village. Two weeks after the 10.5 billion yuan (US$1.6 billion) deal was agreed, R&F Properties signed an agreement with the Chentian village government, now called the Chentian Economic Cooperatives Union, requiring that all residents and merchants must leave by the end of May before demolition begins in June, according to government notices.

The Guangzhou government, which increasingly views its urban villages as a sign of weakness, is keen to replace the narrow alleyways and drab buildings with gleaming modern structures. The city has already successfully built Pearl River New Town, which replaced crowded and unplanned urban villages with skyscrapers.

Long-time urban village residents, who account for less than a tenth of all current residents in many villages, have traded in the old homes that they often built by themselves for new flats in high-rise buildings along with cash compensation, turning many into multimillionaires overnight. In Chentian, over half of the 10.5 billion yuan redevelopment fund will be used to resettle villagers, along with a promise that a third of the redeveloped area will be handed back to the village government.

It feels good to make a fortune overnight due to the urban renewal project, but also feels bad to see our ancestral properties being sold. We and family friends spanning generations may soon become strangers after we resettle in those high-rise apartment buildings.Chentian resident

“It feels good to make a fortune overnight due to the urban renewal project, but also feels bad to see our ancestral properties being sold. We and family friends spanning generations may soon become strangers after we resettle in those high-rise apartment buildings,” one Chentian village resident lamented.

Villagers will receive new flats that will be about five times the size of their old houses, or cash compensation of around 1,121 yuan (US$167) per square foot, according to local villagers. According to real property agents, the average price of pre-owned flats in the area is around 7,000 yuan (US$1,042) per square foot.

But for migrant worker Li Bo, the redevelopment means the end of an era. Li, who is in his early 60s, has lived in Chentian for over a decade, but as with the case with thousands of migrant workers who are not recognised as one of the 7,300 official residents, he has not been consulted about the redevelopment and will not compensated. He is now planning to leave Guangzhou because he will no longer be able to make a living pedalling his flatbed tricycle through the narrow streets selling coal to small eateries and restaurants.

A shop selling low-priced pyjamas and underwear displays large signs announcing the clearance of their entire inventory because of the looming demolition. One sign tells shoppers that the owner “will return to my rural home to till my paddy field”. 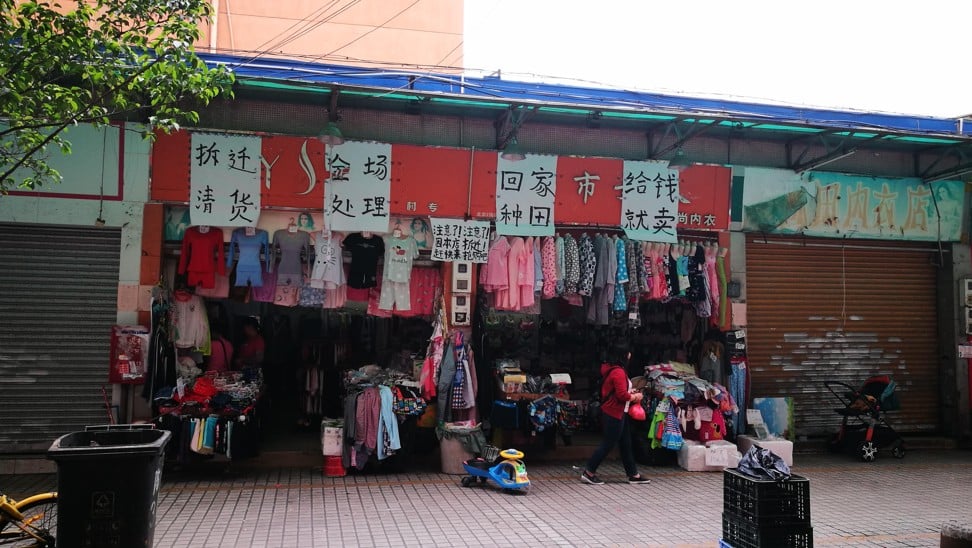 While the phrase “urban village” – a village inside a larger town – is often used by the government to identify dirty, overcrowded areas for poorer residents, the areas nevertheless provide affordable housing for migrant workers and form communities that play a particular roles in a city’s development. Chentian, for instance, is known as a must-go place to find car parts in Guangzhou.

The municipal government of Guangzhou launched its programme to redevelop the city’s urban villages and old factory buildings in late 2017. The pace will speed up this year as China falls back on old habits to boost growth by increasing spending on major urban infrastructure and property development.

At the same time, the city is aggressively transforming the local economy in line with the goals of the Greater Bay Area initiative, which aims at integrate Hong Kong, Macau and nine cities in Guangdong province into a world-class urban cluster that will rival cities such as San Francisco, New York and Tokyo.

“In the last couple of years, the introduction of the Greater Bay Area plan, the marked slowdown in Guangzhou’s [gross domestic product] growth, and [Chinese President] Xi Jinping’s affirmation of the transformation of Guangzhou’s old city during his trip to Guangdong have been the local government’s impetus for the transformation and reconstruction of its urban villages,” said Peng Peng, vice-president of the Guangdong South non-governmental think tank, who has been a close observer of the city’s urban villages.

“The transformation of urban villages can drive an infrastructure and real estate boom in the city, especially since current revenues from land sales and economic growth in Guangzhou lag far behind those of Shenzhen. Therefore, the transformation of the villages can enhance the value of land in Guangzhou, bringing a considerable improvement to Guangzhou’s revenue from land sales and also improve Guangzhou’s competitiveness.”

All auto parts shops will be forced to close next month, then the market will be demolished, and there will be no business next month for stores and eateries nearby.Li Bo

Willingly or reluctantly, a large number of residents are moving out of their villages to make way for the planned demolition projects, including more than 1,000 shops trading second-hand car parts in Chentian.

“All auto parts shops will be forced to close next month, then the market will be demolished, and there will be no business next month for stores and eateries nearby,” Li said. “In the future, it will only become more and more unaffordable here. I’m getting old and might return to my hometown in Hunan when the restaurants close.”

Given the widespread demolition, “there will be no more cheap rent that migrant workers can afford. Many of people will have to leave Guangzhou and go back to their hometowns,” said a resident who did not want to be named but said he made a living as the supervisor of his building. “No one knows whether or not we will be compensated, how much the developer will pay, or where we will move to. But in any case, the auto parts market is bound to be torn apart,” said Chen.

“My landlord, a villager in Chentian, told me she and many of other villagers didn’t want to see their homesteads be destroyed. But she said the reconstruction of the village was mandated by the government, and the current government is just too powerful [to oppose].

Despite the size of the city’s redevelopment project, there has been a lack of public debate over the fate of the villages and the impact of their demolition on local culture and society.

“According to what I know, many of villagers and developers are willing to partner with each other to carry out the village renewal projects in Guangzhou since property prices here are much higher than before. The projects will be very profitable and the banks will be friendly to [those projects] that are government-approved,” said an official from a village in Guangzhou’s Baiyun district, whose refused to give his name.

“On the other hand, to be honest, few villagers will take the risk to against the authorities’ plan. We all understand well the villages have to be reconstructed since this government is mighty, and it’s risky to not agree.

“In the past two years, the campaigns of anti-corruption and crackdown on gang-related crimes have reshuffled many local village officials, as well as lowering the resistance of traditional clan forces in the villages … so that the government can now take a strong lead and significantly increase its ability to promote reconstruction projects in urban villages.”